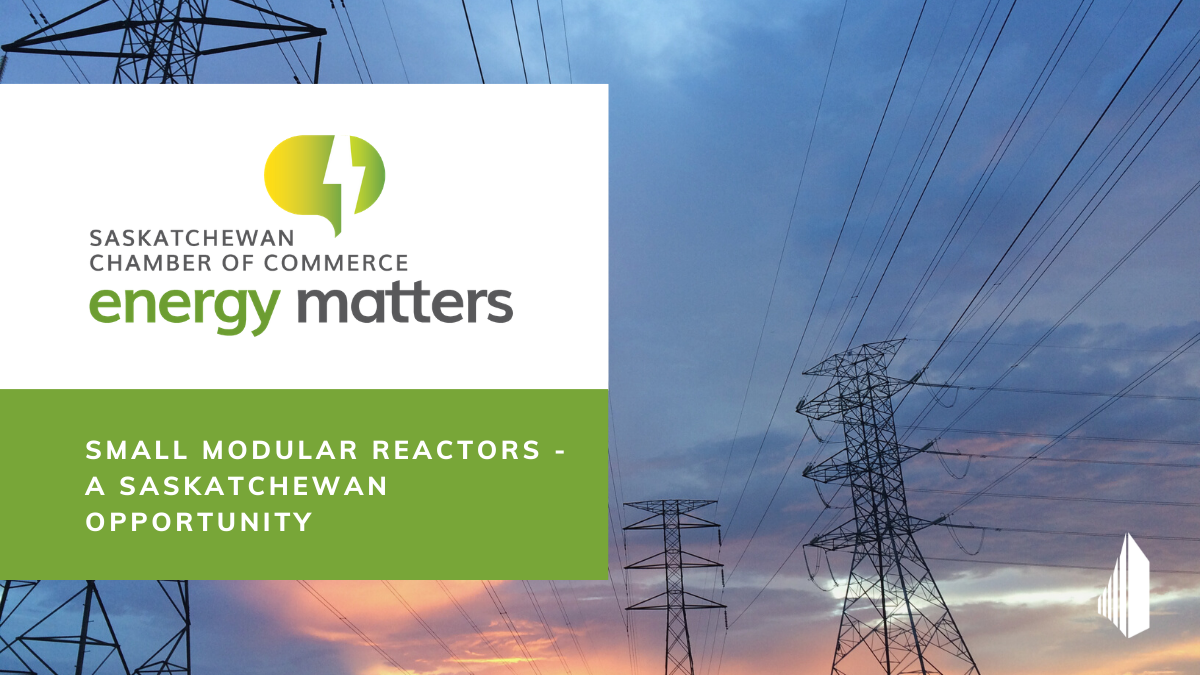 Since the era of the 2008/09 Uranium Development Partnership (UDP), which was commissioned by the Government of Saskatchewan to “identify, evaluate, and make recommendations on Saskatchewan-based value added opportunities to further develop our uranium industry,” the Saskatchewan Chamber of Commerce (SCC) has taken an active role to provide solid, fact based information to our members and to the people of our province regarding the potential for nuclear power production. In fact, the SCC has been so engaged on this topic that our representatives previously toured the Bruce Powerplant in Ontario, we have held Energy Series discussions and included nuclear power considerations in our Building the Low Carbon Economy Report. In short, the SCC has long advocated for Saskatchewan to fully capitalize on the opportunity our uranium deposits offer by incorporating energy production.

However, since the 2009 UDP report, the approach to nuclear power has changed and a new conversation is emerging. No longer a large, expensive project, Small Modular Reactors (SMRs) appear to be the future for nuclear power in Saskatchewan. SMRs are nuclear reactors that produce 300 megawatts (MW) of electricity or less. Much smaller than traditional nuclear power plants, SMRs are cheaper to mass produce and easier to deploy.

The provinces of Saskatchewan, Ontario, New Brunswick, and Alberta have signed a memorandum of understanding (MOU) towards the evaluation and implementation of SMRs. Additionally, in June 2020, the Saskatchewan government established the SMR Unit within the Ministry of Environment. The primary responsibility of the SMR Unit is to fulfil MOU commitments, coordinate provincial SMR strategic planning and implementation, and lead industry, stakeholder and community engagement, including with Indigenous groups.

The most recent development on SMRs happened in March 2021, when a feasibility report on SMRs was prepared by Ontario Power Generation, Bruce Power, NBPower and SaskPower for the governments of Ontario, New Brunswick and Saskatchewan (click to read the report).

After more than a decade of advocacy on this file, the SCC acknowledges that cost and safety concerns have historically inhibited any move towards nuclear power production in Saskatchewan. The SMR approach addresses the cost considerations, relative to previous nuclear power models and when coupled with carbon pricing, but work still needs to be done to inform the public of the safety of SMRs. A recent survey found that support for SMRs remained mixed in Saskatchewan, specifically “participants were asked if they supported or opposed Saskatchewan building new facilities to generate power from the listed sources. Support for new facilities was ranked from highest to lowest as: solar (82.3%), wind (75.5%), hydro (73.2%), natural gas (68.0%), geothermal (65.6%), small modular reactors (47.1%), Manitoba Hydro imports (39.0%), biomass (35.1%) and coal (25.6%) with CCS.” (Hurlbert, 2020). Understanding this situation, the SCC will continue its efforts to move past rhetoric and spread understanding of SMRs.

The final decision to build an SMR in Saskatchewan has not been made yet as a range of technical and environmental studies are still required, but if progress continues as projected, deployment of SMRs in Saskatchewan could begin in the mid-2030s. This could play a significant role in helping Saskatchewan achieve the federal government’s commitments to net zero emissions by 2050.

Saskatchewan must modernize and decarbonize its electricity. SMRs offer an opportunity for low GHG emission baseload energy production. As such, the SCC supports the further evaluation of SMRs for Saskatchewan, when considered in conjunction with expanded renewable resource energy production, to build a sustainable and reliable future energy supply in the province.