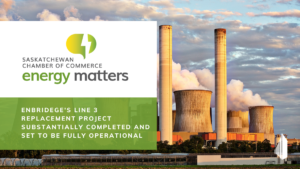 The following is a media release released by Enbridge Inc. on September 29, 2021

CALGARY, AB and DULUTH, Minn., Sept. 29, 2021 /CNW/ – Enbridge Inc. (Enbridge or the Company) (TSX: ENB) (NYSE: ENB) announced today the achievement of a major milestone with the substantial completion of the Line 3 Replacement Project and the establishment of an in-service date of October 1. This step marks the full replacement of the entire 1,765-kilometre/1,097-mile-long pipeline from Edmonton, AB. to Superior, WI. With new state-of-the-art, thicker-walled pipe, its completion ensures a safe, reliable supply of North American crude oil to U.S. refineries, helping fuel the quality of life for millions of people.

“After more than eight years of many people working together, extensive community engagement, and thorough environmental, regulatory and legal review, we are pleased that Line 3 is complete and will soon deliver the low cost and reliable energy that people depend on every day,” said Al Monaco, Enbridge President and Chief Executive Officer. “From day one, this project has been about modernizing our system and improving safety and reliability for the benefit of communities, the environment and our customers.

“Line 3 was developed and executed with the most state-of-the-art approach to design, construction and environmental management,” Monaco added. “We’re also very proud of the relationship of trust we’ve built with communities along the right-of-way in both Canada and the United States. Our goal is to continuously live up to the trust that all of our stakeholders have placed in us.”

The new 542-kilometre/337-mile Minnesota segment of Line 3, which follows other segments already placed into service in Canada, North Dakota and Wisconsin, restores the full pipeline capacity of 760,000 barrels per day to meet the energy needs of refineries in the Midwest. Many labor groups, including the International Union of Operating Engineers (IUOE), Laborers’ International Union of North America (LIUNA), United Association of Plumbers and Pipefitters (UA), and the International Brotherhood of Teamsters, and communities along the right-of-way made the successful completion of the project possible.

In Minnesota, the Line 3 replacement was the most studied pipeline project in state history, with input gathered from 71 public comment regulatory meetings and over 3,500 community engagement meetings. Exhaustive scientific review exceeding legal and regulatory requirements resulted in support and project approvals from federal, state, and local agencies, and Native American tribes.

More than 1,500 Indigenous people worked on replacing Line 3 in the U.S. and Canada. Specifically, in Minnesota, where Native Americans made up seven percent of the Line 3 workforce, over US$300 million went directly to Native-owned contractors, tribal community investments and training and hiring Native individuals. In total, the Company invested CDN$750 million with Indigenous communities, individuals, and businesses.

Throughout the project, Enbridge has shown continuous respect for tribal sovereignty. In Minnesota, 30 tribes took part in the consultation process with the U.S. Army Corps of Engineers. The project included a first-of-its kind Tribal Cultural Resource Survey led by the Fond du Lac Band of Lake Superior Chippewa which employed tribal cultural experts who walked the full route identifying and recording significant cultural resources to be avoided. Construction was completed under the supervision of tribal monitors with authority to stop construction to ensure protection of important cultural resources.

Forward-Looking Information
Forward-looking information, or forward-looking statements, have been included in this news release to provide information about Enbridge Inc. (“Enbridge” or the “Company”) and its subsidiaries and affiliates, including management’s assessment of Enbridge and its subsidiaries’ future plans and operations. This information may not be appropriate for other purposes. Forward-looking statements are typically identified by words such as ”anticipate”, ”expect”, ”project”, ”estimate”, ”forecast”, ”plan”, ”intend”, ”target”, ”believe”, “likely” and similar words suggesting future outcomes or statements regarding an outlook. Forward-looking information or statements in this news release include statements with respect to the Line 3 Replacement Project, including the benefits thereof and the expected in-service date.

Although Enbridge believes these forward-looking statements are reasonable based on the information available on the date such statements are made and processes used to prepare the information, such statements are not guarantees of future performance and readers are cautioned against placing undue reliance on forward-looking statements. By their nature, these statements involve a variety of assumptions, known and unknown risks and uncertainties and other factors, which may cause actual results, levels of activity and achievements to differ materially from those expressed or implied by such statements. Assumptions regarding the expected supply of and demand for crude oil, natural gas, NGL and renewable energy, and the prices of these commodities, are material to and underlie all forward-looking statements, as they may impact current and future levels of demand for the Company’s services. Similarly, energy transition, including the drivers and pace thereof, the COVID-19 pandemic, exchange rates, inflation and interest rates impact the economies and business environments in which the Company operates and may impact levels of demand for the Company’s services and cost of inputs, and are therefore inherent in all forward-looking statements. Due to the interdependencies and correlation of these macroeconomic factors, the impact of any one assumption on a forward-looking statement cannot be determined with certainty. The most relevant assumptions associated with forward-looking statements on announced projects and projects under construction, including estimated in-service dates, include the following: the impact of litigation and government, regulatory and stakeholder actions and approvals on construction and in-service schedules; the availability and price of labour and construction materials; the effects of inflation and foreign exchange rates on labour and material costs; the effects of interest rates on borrowing costs; and the impact of weather.

Enbridge’s forward-looking statements are subject to risks and uncertainties, including, but not limited to those risks and uncertainties discussed in this news release and in the Company’s other filings with Canadian and United States securities regulators. The impact of any one risk, uncertainty or factor on a particular forward-looking statement is not determinable with certainty as these are interdependent and Enbridge’s future course of action depends on management’s assessment of all information available at the relevant time. Except to the extent required by applicable law, Enbridge assumes no obligation to publicly update or revise any forward-looking statements made in this news release or otherwise, whether as a result of new information, future events or otherwise. All subsequent forward-looking statements, whether written or oral, attributable to Enbridge or persons acting on the Company’s behalf, are expressly qualified in their entirety by these cautionary statements.

About Enbridge Inc.
Enbridge Inc. is a leading North American energy infrastructure company. We safely and reliably deliver the energy people need and want to fuel quality of life. Our core businesses include Liquids Pipelines, which transports approximately 25 percent of the crude oil produced in North America; Gas Transmission and Midstream, which transports approximately 20 percent of the natural gas consumed in the U.S.; Gas Distribution and Storage, which serves approximately 3.8 million retail customers in Ontario and Quebec; and Renewable Power Generation, which generates approximately 1,766 MW of net renewable power in North America and Europe. The Company’s common shares trade on the Toronto and New York stock exchanges under the symbol ENB. For more information, visit www.enbridge.com.

Click here to learn more about the SCC’s Energy Series